Share
Sergeant Greg Moore was shot and killed in the line of duty in Coeur d’Alene, ID on May 5th, 2015. It shocked and saddened the entire community. He served our community for 14 years before he stopped a suspicious man on foot at 1:30am after a series of car break-ins were reported in the area. The suspect fired gunshots at Sgt. Moore and then fled the location in Moore’s patrol car. The suspect was later arrested and Moore succumbed to his gunshot wounds many hours later at Kootenai Medical Center. 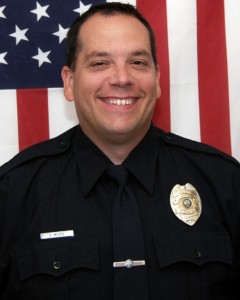 Moore was survived by his wife, Lindy Moore, and daughter, Gemma(1) and ex-wife, Jennifer Brumley, and son, Dylon(12). Moore was very proud of how he was able to put his children first and have a functioning blended family. When Lindy received a call that Greg had been shot in the line of duty, the first thing she did was call Jennifer and have her come to the hospital. The women believe this is part of Moore’s legacy as well. During Brumley’s eulogy at the funeral she said, “He saw it as a model for what a blended family could look like.” His friends described him as funny and gregarious. He also kept in touch with a number of young people that he had arrested over the years. He would check to see how they were doing. Our community stepped and raised more than $250,000 for the family.

In 2016 the Coeur d’Alene City council voted to support the construction of a contemplative water feature in McEuen Park in downtown Coeur d’Alene. It will honor, respect and remember Coeur d’Alene Police Sergeant Moore and also recognize the ultimate sacrifice paid by over 20,000 peace officers across the nation. The City of Coeur d’Alene owns the land and will maintain it in perpetuity, and no tax dollars will be used to fund the memorial.

On June 1st, will be donating 27% of our proceeds to Panhandle Parks Foundation to help raise funds for the memorial. Please consider joining us from 7-9pm to show our fallen heroes. https://www..../event/150947