Share
Thanksgiving is just around the corner! We're definitely grateful for the amazing painters we get each class, and for the wonderful community we get to be a part of here in Spokane! And of course we're thankful for the super delicious food we're bound to chow down on. And what's more iconic for the holiday than a turkey? Here's some quick turkey facts we're hope you'll appreciate! 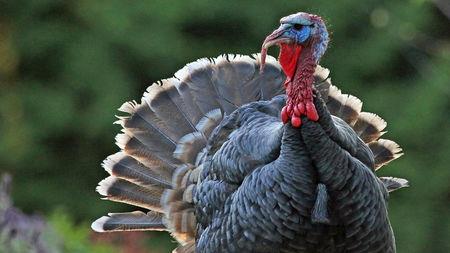 2. Turkeys can fly. Not just that, they're ranked among the top five largest flying birds in the world!

3. The pilgrims probably didn't eat turkey at the first Thanksgiving. The Wampanoag brought deer, and the English likely brought geese or ducks.

4. A group of grown turkeys is called a rafter, and a group of baby turkeys are poults.

5. National Turkey Month is in June, not November or December.

6. Turkeys have two stomachs. Since they don't have teeth, the second stomach helps them break down large bits of food before it passes onto their normal stomach to finish the task.

8. Baby poults are self-sufficient. They have their down feathers, can walk, run and eat without help. Don't you wish the wee ones in your life were just as precocious!

9. No founding father wanted the Turkey at the national bird. Ben Franklin wrote to his daughter that he did not want the greedy and conceited bald eagle as the country's bird because it did not represent the American spirit and was of bad moral character. He joked that it looked like the turkey, which would even be a better fit because it is courageous and defensive and a true native to the land, but he didn't actually want either as the emblem.

10. You can tell from the poop which gender a bird is. Piles shaped like a 'J' are from male turkeys. Spirals are from females.